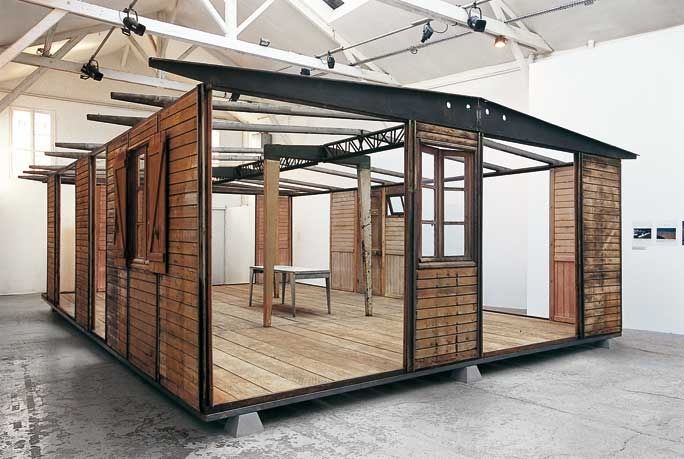 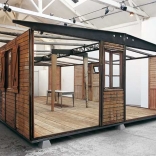 For the first time in public, the Galerie Patrick Seguin will present live, every day, the set up of a Jean Prouvé 6 × 6 meter demountable bungalow, created for the war victims in Lorraine.

Indeed, a team composed of three persons will take care of the set up of this reference of demountable architecture on the booth on a daily basis – from 11am to 7pm – unveiling each day the absolute modernity of this project. At night, a second team will be in charge of taking down and crating each of the elements composing the house (portal frame and ridge beam, exterior joint covers, facade panels, metal floor structure...) For the nocturne on Thursday 16 June the gallery will organize the set up, dismantling, and crating all in one day.

Through his constructions, the visionary creator Jean Prouvé, answered the needs of his contemporaries : simplification of the set up and assembly, moveable structures enabling to send them far away from their production site, simplicity and practicality. First built in 1944 to rehouse war victims in Lorraine, these houses only survived the postwar period in very limited numbers. Doubly involved in regeneration of the region – as a native of Nancy and a builder of genius – Jean Prouvé won an order for emergency housing from the Ministry of Reconstruction and Town Planning. Readily transported and dismantled, his “shacks” made entirely of wood and metal (of which the latter was in very short supply) were a real architectural coup. The components were shipped directly to bomb-devastated villages, where they could be assembled on site in a day by three people, enabling the homeless to stay on. Unfortunately, the shortage of materials and funding, together with official emphasis on the need for permanent housing, meant that production of these transitional dwellings never got beyond the limited series stage. Jean Prouvé was awarded the Ministry’s Gold Medal in 1947.

Since its creation in 1989, the Galerie Patrick Seguin devoted itself to the artwork of some of the most distinguished figures of the twentieth century architecture and furniture history (Jean Prouvé, charlotte Perriand, Pierre Jeanneret, Le corbusier, Jean Royère) and organized numerous exhibitions in collaboration with the Sonnabend Gallery in New york, the Gagosian Gallery in Los Angeles and Paris, the centre Pompidou, the MOMA and the vitra Design Museum.