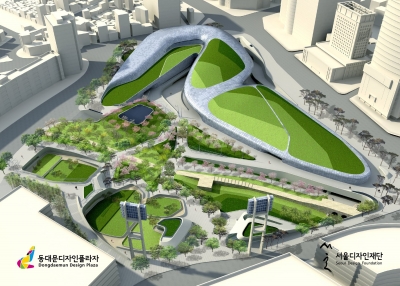 To the city of Seoul, design refers to more than a simple means to improve its appearance. Design is a lever of the city’s policies to solve social problems. Incorporating design into the city’s policies, the Seoul Metropolitan Government has been exerting every effort to make Seoul a safer, sounderand more enjoyable city. Such efforts of Seoul were well recognized by the international community, winning the title of World Design capital endowed by the IcSID in 2007, and the UNEScO city of Design in 2010. In order to accelerate the ‘Design Seoul’ initiative, the city government launched the Seoul Design Foundation in March 2009, which has been successfully conducting global scale design projects, such as World Design capital 2010 and the Seoul Design Fair.

In the center of the Foundation’s projects is the Dongdaemun Design Plaza (DDP). On the 62,957m2 space where two large stadiums were standing in a fashion district in central Seoul called Dongdaemun, DDP is currently being built, aiming for its completion in July 2012 and Grand Opening in April 2013. This four-story design edifice will include the design museum, exhibition halls, library and other design-related facilities along with two generous convention halls. DDP is designed by Iraqi-born British architect Ms. Zaha Hadid, and its shoe-like shape is in harmony with Seoul’s landscape. Once opened, DDP will become the world’s design hub where knowledge and information on design are generated, gathered and reproduced.
In addition to the construction of future design center DDP, the Seoul Design Foundation is implementing a variety of projects to revitalize the local design industry. The Foundation has been supporting outstanding designers and small-sized design companies so that they can advance into wider range of markets, opening an online market for Seoul designers through their web premises.