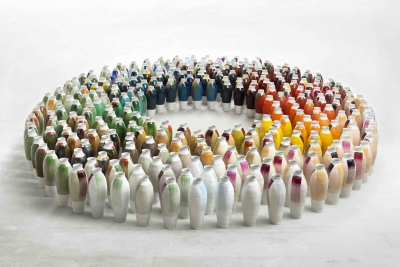 Hella Jongerius has researched colour in all its diversity since the start of her career. This research led to experiments with colour using one of her existing designs – the Red White vase in 1997. The first two series of coloured vases were produced in 2003 and 2007, using the form of the vase as a “canvas” for layers of industrial spray paint laquers. In 2010 a third series of coloured vases was created in close collaboration with the craftsmen of Royal Tichelaar Makkum, the Netherlands’ oldest ceramics manufacturers.

The 300 coloured vases (series 3) represent an investigation into the perception of colours that optically merge. Each vase combines a base layer selected from 150 traditional glaze recipes, containing cadmium, copper and other mineral oxides with a second layer consisting of a modern, synthetic glaze. These glazes were applied to the skin of the vase in various layers: a kind of pointillism on porcelain. Half of the vases have a third layer of acrylic paint lacquer added to them. This experiment resulted in 300 unique vases, featuring polychrome colours reminiscent of the colour intensities of old paintings.